Thyroid and pregnancy have a direct relationship that not everyone knows. During pregnancy, the mother’s thyroid gland is “forced” to increase its production of thyroxine by 30 to 50%. Its balance and good functioning will favor the correct brain development of the fetus and its nervous system throughout the first trimester.

Sometimes, it is fascinating and frightening to discover how our glands and hormones mediate so much in our well-being. Often, a tiny imbalance between them is enough to perceive that certain things are no longer going well. We raise or lose weight, we are more tired, or worse, if we want to conceive a baby. We may even have certain difficulties.

The thyroid of a fetus is not formed until week 10 or 12 of gestation. Until that moment. It depends exclusively on that of his mother.

Irregularities in menstruation, fertility and even the correct development of a pregnancy depend on that small organ in the form of a butterfly located right there, under the Adam’s apple. With just 30 grams rises like that precise factory of the hormones triiodothyronine (T3) and thyroxine (T4) that have an immense impact on our health and especially in the proper development of a baby throughout those first months of gestation inside his mother.

Thyroid and pregnancy, the importance of a key exchange between mother and child 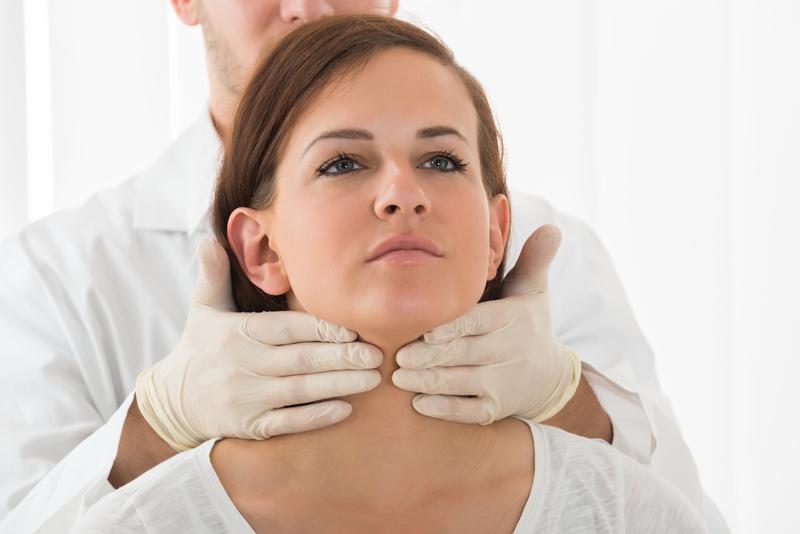 The thyroid gland develops in the fetus between week 10 and 12 of pregnancy. Until then. It will depend exclusively on your mother’s thyroid gland. Something like this undoubtedly has immense relevance. If a woman has a clinical history characterized by a thyroid disorder. Such as hypothyroidism, several things can happen.

The first is that although there is some difficulty in conceiving, it does not mean that it is impossible to get pregnant. Now, the risk of an abortion is there, as well as premature births or other medical problems such as preeclampsia (gestational hypertension).

Thyroid and pregnancy are two words that every woman should keep in mind in case of wishing to have a child. Hence, it is always recommended to perform a thyroid analytical profile to diagnose any problem. Any small dysfunction that may cause major or short-term problems.

A normal pregnancy already involves a direct alteration of the thyroid function. This is due to the influence of two very specific hormones: the hormone human chorionic gonadotropin (hCG). The hormone that is measured in the pregnancy test, and estrogen, the main female hormone.

The first, the hormone chorionic gonadotropin acts as a stimulant for the thyroid. This change in the woman’s organism arises after 2 or 3 days after conception. And will last around three months. There are mothers who do perceive this change in a more pronounced way (also known as false hyperthyroidism), to the point of experiencing more vomiting than normal, heart palpitations and even weight loss .

On the other hand, once the second trimester arrives, other effects arise that also modify the function of the thyroid. In this case, the responsible ones are the female hormones themselves (the estrogens). Thus, between week 16 and 20, what happens is that the level of that protein responsible for fixing thyroxine in blood doubles (TBG). That alteration is known as false hypothyroidism. But if clinical tests indicate that free T4 (thyroxine) has not been modified, there is no problem.

Symptoms of hypothyroidism in pregnancy

Since the thyroid and pregnancy present such an obvious relationship, it is common to periodically monitor the thyroid profile throughout the pregnancy in the mother. Thus, and in case an insufficient production of thyroxine is detected, we will be faced with a diagnosis of hypothyroidism. It must be said that yes, it is easily treatable. The symptoms would be the following:

Also, as we noted at the beginning, the appearance of a problem in the thyroid during pregnancy increases the risk of miscarriage and premature birth.

Symptoms of hyperthyroidism in pregnancy

The onset of hyperthyroidism during pregnancy is a relatively low disorder. As the population studies reveal, the incidence is 2 women out of 1000. The symptomatology is the following:

On the other hand, if a mother suffers from hyperthyroidism during pregnancy and does not receive treatment, there is also a risk of fetal death.

Thyroid and pregnancy: the importance of prevention

The relationship between thyroid and pregnancy should not keep us awake as long as we have an adequate medical follow-up. These disorders in the thyroid gland are treatable. And have a good prognosis for both the mother and the baby.

Now, in case we have a family history associated with this disease and we are thinking about having a baby. It is advisable to discuss this information with the specialists.

Proper supervision based on regular checks, coupled with a diet and healthy lifestyle habits, will undoubtedly allow us to live a safer pregnancy.

Symptoms that you have thyroid problems and how to detect them

Do you do everything to lose weight and you do not get results? Did you drop your hair? Be alert with these and other signs

The thyroid is responsible for regulating the body’s temperature, energy and metabolism. Many people can have problems with this gland and do not know it. Because their symptoms are usually associated with stress and other disorders.

Here are some signs of your body that indicate problems with the thyroid.

After the symptoms mentioned above, it is very important to know the family history. Then, you must make the consultation with the specialist doctor, who evaluates the patient by palpating the neck