Often you complain of heartburn, sudden chest pains, acidity or tachycardia: these are just some of the alarm bells that could indicate that you suffer from gastroesophageal reflux.

Gastroesophageal reflux is a physiological phenomenon that occurs to some extent in all individuals. It becomes a disease (GERD) when reflux gives rise to frequent symptoms or creates complications (esophagitis, Barrett’s esophagus).

Gastroesophageal reflux when it becomes pathological is a very annoying and also quite common disorder: it often occurs between 30 and 50 years, with a similar incidence among men and women.

The likelihood of reflux occurrence increases with age but is also very common in pregnant women and newborns.

Knowing the typical and atypical causes and symptoms of gastroesophageal reflux allows you to recognize it. And therefore to intervene promptly, even consulting your doctor, which is always the wisest way to take care of your health in case of doubt.

A healthy diet is always the basis of our well-being and, even in the case of gastroesophagus reflux, therapy and prevention also pass from the table.

So how can you rework your life and your diet to alleviate the ailments and fight the disease? We asked Dr.  Luca Piretta, SISA nutritionist and gastroenterologist.

What is gastroesophageal reflux?

Gastroesophageal reflux consists of the ascent of gastric contents, mainly acid, into the esophagus. This causes symptoms and damage (inflammation and possibly erosions) to the esophageal mucosa, which unlike that of the stomach does not know how to defend itself from acid.

When refluxes are numerous or very prolonged they become symptomatic and give rise to gastroesophageal reflux disease (GERD).

This pathology, which in some cases can also become chronic, has several factors predisposing to its appearance, including overweight and obesity, public enemies of health.

In these cases, the diet as well as reducing the symptoms and the frequency of reflux episodes will also help you lose weight.

In the vast majority of cases, gastroesophageal reflux is represented by the acidic material contained in the stomach, but at other times it can raise food or bile. In this case we talk about bile reflux. Bile is produced by the liver and is excreted via the choledochus in the duodenum. It may happen that bile initially flows back into the stomach (duodenum-gastric reflux) and subsequently can also rise into the esophagus (biliary gastro-oesophageal reflux).

According to statistics, 44% of the adult population complains of burning at least once a month.

Pyrosis, or the retrosternal burning that rises from the stomach, and acid regurgitation are the two most characteristic symptoms of GERD. Typical symptoms are considered because their presence almost certainly testifies to the presence of this pathology.

Sometimes however the GERD manifests itself with different symptoms, not exclusive of this pathology, which for this reason are called atypical.

The most frequent of these symptoms is back sternal pain, sometimes so violent that it looks like a heart attack. Other times other disorders appear such as …

It often happens that we tend to attribute the blame for these symptoms to other diseases, thus delaying the diagnosis. 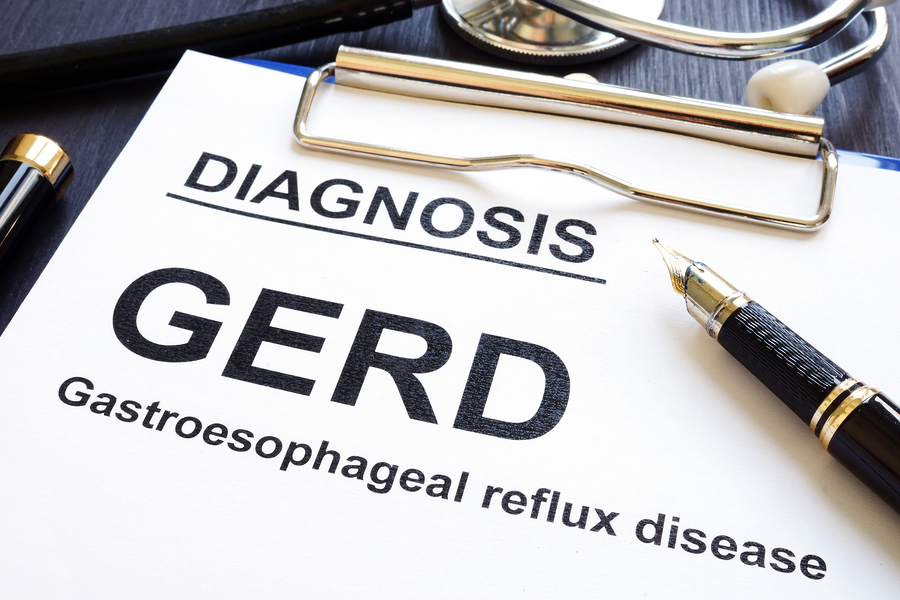 Obesity and overweight are a very important favoring factor because, by increasing abdominal pressure, they allow an easier ascent of the gastric acid content into the esophagus.

It has not been fully demonstrated but it is likely that stress makes gastric emptying more difficult and consequently, indirectly, may favor reflux.

In any case, the cause of gastric reflux in adults is an altered esophageal sphincter function.

Another cause of importance is the slowed-down gastric emptying.

In fact, the longer the food remains in the stomach, the more likely it is that gastroesophageal reflux will occur.

Gastroesophageal reflux is also quite common among pregnant women and obese people, due to the conformation assumed by the abdomen.

The episodes of gastroesophageal reflux in the newborn are very common fundamentally due to a poor maturity of the anatomical and functional mechanisms of reflux containment.

The permanently horizontal position of the newborn also promotes reflux.

The reflux of the newborn is mainly correlated to the act of the meal and is hardly made up of only acid, but almost always from the milk of the feed.

After 6 months, the regurgitations that attest to the reflux episodes become less frequent and, even if present, are unlikely to reach the mouth.

Pregnancy is another condition predisposing to gastroesophageal reflux.

The increase in abdominal volume and the consequent pressure on the stomach are a major factor of relief, as is the hormonal action on the mechanisms that regulate the function of the lower esophageal sphincter.

Unfortunately, pregnant women are not advised to use the drugs they normally use, so they need food advice and to correct some habits.

In the presence of burning or acidity, in the absence of alarm factors (weight loss, vomiting, dysphagia, old age), the diagnosis of GERD is very simple. If the symptoms are very sporadic it may be sufficient to correct eating habits.

On the contrary, if the symptoms are very frequent or atypical then it is necessary to consult the doctor to evaluate with him the opportunities to carry out tests and / or take specific drugs.

An esophagogastroduodenoscopy, a 24-hour pH-impedance may be necessary.

Disorders related to reflux, if not “turned off” properly, can evolve over time into more serious situations, such as ulcers, esophagitis (including the dreaded Barrett’s disease, which is a risk factor for esophageal cancer), asthma and respiratory disorders.

Drugs for the treatment of reflux

The milder forms can be safely solved with correct dietary and lifestyle changes, others necessarily require drugs.

In milder and non-chronic cases, nutrition plays a major role in countering gastroesophageal reflux. There are in fact foods that can aggravate it, and therefore they must be avoided, and others that attenuate the effects, associated with some tricks that allow you to live better.

In the most serious cases, the doctor can prescribe drugs that block the production of acid and therefore attenuate or eliminate the burning, or at least help to live with the disorder making it lighter or occasional.

Some medications to control symptoms can be bought in pharmacies even without a prescription.

Reflux occurs particularly when the stomach is full, so, suffering from it, it is better to avoid large meals.

It is good to distribute calories and nutrients over 5 meals that is breakfast, two main meals not too heavy and two snacks, one mid-morning and one mid-afternoon.

A hypocaloric diet is also a good rule, to maintain weight and / or lose weight: the extra pounds, in fact, increase the abdominal pressure and give way to the ascent of gastric acid to the esophagus.

Attention, therefore, to avoid frying and dishes that are too elaborate or loaded with seasonings, both to keep weight under control and because they can slow gastric emptying and, consequently, promote reflux.

Important is the supply of fibers, always useful, but even more so with the reflux, which could also be caused by the effort to free the intestine in the case of constipation, due to the compression of the stomach.

Furthermore, it is recommended to avoid the evening snack and try not to consume more than one dish with a side dish at mealtime.

Diet to prevent and treat reflux

Proper nutrition and a healthy lifestyle can help both prevent and treat gastroesophageal reflux.

In addition to paying attention to eliminating foods that could worsen acidity, it is important to follow some precautions at the table:

Reflux: The foods to bring to the table

Then all the legumes are good and the array of carbohydrate-source foods is also abundant: from wholemeal bread, white and with corn flour, to whole-grain and / or white rice pasta, from couscous to biscuits and crackers. Oat and bran based cereals are also good. They are all foods that do not put a lot of pain into the stomach and sate for a long time.

Even milk is useful against reflux, because it buffers the acidity of the stomach. The skimmed one is preferred because otherwise the presence of fat could slow down the digestion and, therefore, favor the disorder. This also applies to cheeses, while it is better to avoid yogurt and kefir.

OK also for the meat, especially lean and white: yes to roast beef, very lean beef, chicken, as long as it’s without skin. You can eat bresaola, cooked ham and raw without fat, in small quantities, according to the dictates of the Mediterranean diet.

The eggs have no contraindications, better if soft-boiled because they are more digestible. The fish is just fine, but always without added fat.

As for the choice of foods, you should eliminate from your diet those foods that for various reasons can trigger symptoms.

Among the meats, avoid smoked ones, fatty pork cuts and cold cuts.

Also some types of fruit, such as apricots, strawberries, kiwi, oranges (and their juice), have an acidity that could be annoying. The same happens for raw tomatoes.

Attention also to garlic, onion, spices, especially spicy: chilli, paprika and pepper (but also curry, cinnamon and ginger) that can reduce the pressure of the lower esophageal sphincter or irritate an already inflamed esophageal mucosa

Better to avoid pizza, because inadequate leavening, the presence of tomatoes and heavy seasonings can trigger reflux episodes.

Eye to salt, which should always be consumed in moderation, especially if you suffer from reflux, because it could irritate a mucous membrane already inflamed by the acid.

Avoid fizzy drinks and sparkling water, since the bubbles due to carbon dioxide do not help digesting, they only dilate the stomach and when they go up into the esophagus they can also carry acid.

Better to also limit tea and coffee and drink it not too hot.

No to spirits and wine, both white and red.

Mint (in particular as a drink) should also be limited as it reduces the pressure of the lower esophageal sphincter, thus favoring the ascent of the acid into the esophagus.

And double no also chocolate, whose components, such as caffeine, theobromine, fats and cocoa, can promote reflux.

Reflux: Fight it with sport

Sport can help improve reflux symptoms if done at the right time. The advice is not to practice sports close to meals but to wait at least 2 hours, especially if you are active in aerobics or have had a large meal.

On a full stomach, it is best to avoid intense sports that increase abdominal pressure, such as running and weight lifting.

Practices like pilates, meditation or yoga can help you deal with negative emotions, such as anger and anxiety, relieving reflux symptoms.

Moreover, always respecting the rule of 2 hours after the meal, the fact of working on deep breathing can help not to increase the abdominal pressure.

To alleviate the symptoms of gastroesophageal reflux, you can follow some other simple steps: